Although I wasn’t at liberty to say it before, the song I’ve been referencing here on mikeshinoda.com in the past few weeks…is actually being done for Michael Bay’s new Transformers film, due out June 24th.

In addition–and probably ever cooler–we have been offered the unique opportunity to help score the film. The song we wrote is being used as one of the themes, and we will be writing various interpolations on that theme, and trying out some other thematic ideas as part of the (very large) team scoring the film.

My bandmates and I are working with award-winning film composer (and resident ass-kicker) Hans Zimmer. We met with Hans last week, and heard some of the incredible things he and his guys have done with our new song. In the next few days, we’ll be doing some work with Hans’ amazing writing and recording crew.

Michael Bay has shown us select scenes from the film, and it looks incredible. I can’t wait for you to see it.

Revenge Of The Fallen Tidbits

So it was this in mind that I asked Michael the other day if he was planning on doing something similar. “Yes” was his response. He indicated that it might be available for this holiday season. So I’m looking forward to that.

The Showest footage was pulled down because it was just a 12-hour thing.

I just wanted the fans to get a taste of what we have been making for a year and a half because we have been so quiet. The piece was cut about a month ago for this Showest thing I accepted this past month – so as you can see many of the shots were far from being finished renders. This dinky little site received over 1,500,000 hits and 550,000 downloads in this short time. Anyway the trailer is being printed today and coming out on Wolverine and Star Trek. 64 days left!

Here is the video tribute that was shown before Michael Bay accepted the Showest 2009 Vanguard Award for Excellence in Filmmaking.

For those interested in the post production aspect of movie-making, here is a cool behind the scenes for the ACE (American Cinema Editors) blog.

Every new movie or television production goes through the process of deciding about what technology to employ. Long ago it was a simple as “KEM, Moviola, or Steenbeck.” Now of course it is a lot more complicated. And every show is breaking new ground in some fashion.

Case in point: Transformers 2 (Transformers: Revenge of the Fallen). It is still possible to edit major feature film releases with Meridien systems, but using the latest hardware and software from Avid provides several new benefits.

One of the important new abilities was to allow the director, Michael Bay, to have a full working Media Composer on his laptop. Editorial provides him with an up to date portable drive with all media and a current project which allows him to comment on scenes, and to clip favorite takes for the editors to work with.

Paul Rubell is one of five editors on the project. He was brought on during post, after he had finished Public Enemies for Michael Mann – editing on Meridien systems. Paul was re-editing several scenes but had difficulty getting the very busy director to view and comment on them. Finally, the director was given these new cuts on his laptop, and Paul was soon given the notes he needed to proceed.

Steven Spielberg sat next to me in a big 100 person theater at Sony today. There were 98 empty seats. The lights came up after we just watched my cut of Revenge of the Fallen. He turned to me and said “It’s awesome”. He felt this movie was better than the first – and probably my best, who knows – at this point in a movie you start to lose your objectivity. I just hope the fans like it. I’m going to start putting it in front of audiences in a few weeks – no you are not invited, yet.

We have 60 days left. Let me tell you it will be a race to finish. It’s 12 at night and we are still working here in the edit room. Everyone at ILM and DD are killing themselves right now, they are doing a stellar job on the effects. We also just finished our trailer which is coming out with Wolverine. Talk to you soon. 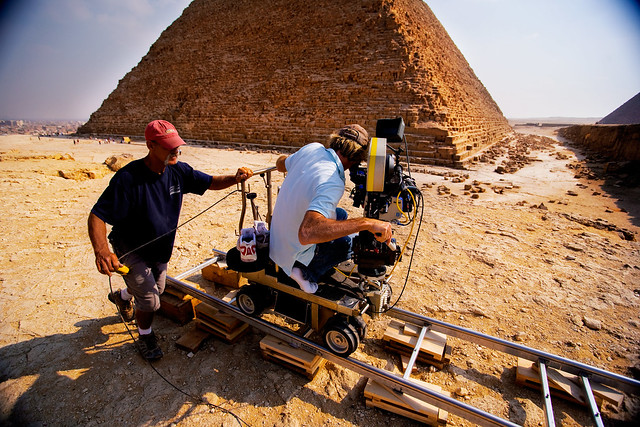 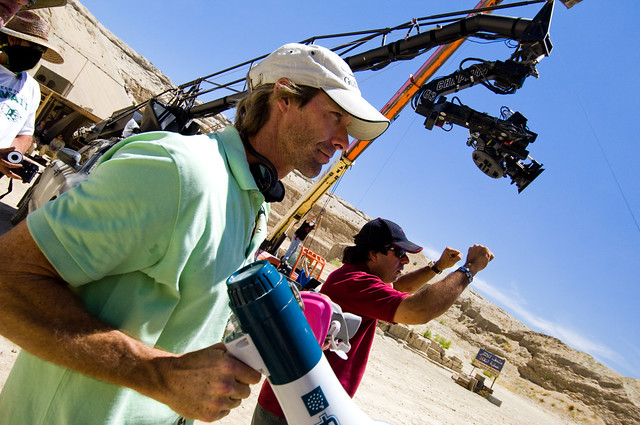 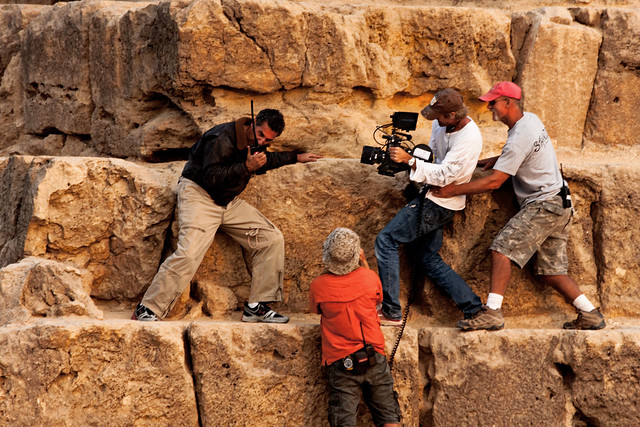 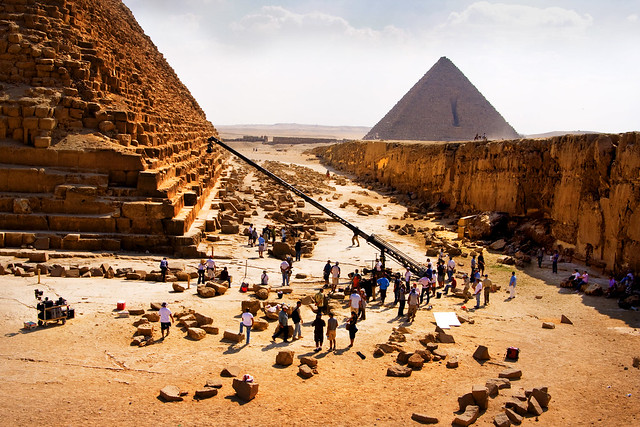 “… Few have enjoyed the success of director of the year Michael Bay, who helms this summer’s Transformers: Revenge of the Fallen. Bay came to accept the award for director of the year, but was looking forward to giving theaters something back: advice.

“Let’s be honest,” he says. “Some of the theaters still suck. And we’re working on movies two or three years. These exhibitors are the most important people in the industry. All of the magic happens in the two hours people are sitting in the theater. Not watching it on DVD. Not watching it on the computer. I want to tell them to make the moviegoing experience as special as they can, because that’s what burns in people’s memories.”

Revenge Of The Fallen Robots

It’s always the quiet ones you need to fear.

In Transformers lore, the mechanical jaguar Ravage has been a villain favorite since the 1980s for his stealthy tactics and deadly force. Ever since a four-legged mechanical beast prowled through the trailer for summer’s sequel, Revenge of The Fallen, fans have been awaiting more word about the feline-ish Decepticon. As more robots in the June 24 movie are revealed, Ravage comes into focus.

“In the spirit of ‘more than meets the eye,’ Ravage isn’t just lethal because of his sharp teeth,” says screenwriter Alex Kurtzman. “There’s actually another skill set Ravage has that didn’t exist before, so there’s going to be a surprise for fans.”

This version of the cat already looks far different from the original, with a single glowing red eye and a swinging, mace-like tail, but his role will be similar to the 1980s cartoon and Hasbro toy — the ultimate spy.

Ravage often was dispatched to monitor the heroic Autobots and their human allies, reporting back to the Decepticons by transforming into a cassette tape and replaying his recordings through the larger robot master Soundwave, who switched into a Walkman-sized tape deck. (How a giant robot became a small piece of sound equipment was a comical hole in logic never fully explained.)

The cassette tape transformation is gone, of course; Ravage doesn’t turn into anything. But Soundwave will appear, again serving as an evil communications expert but this time in the form of an orbiting space satellite.

“They are still connected,” fellow screenwriter Roberto Orci says of Soundwave and his pet. “But rather than trying to hold onto a notion as antiquated as an audiotape, which some members of our audience have maybe never laid eyes on, we wanted to go a new way.”

And Ravage, as before, won’t speak like the other Transformers.

“We wanted to stay true to the idea that Decepticons who take visual clues from beasts maintain that,” says Orci. “It would be strange to have a talking jaguar, or a scorpion with an English accent.”

Filmmaker Michael Bay has ensured that Ravage has lots of company, including many redesigned favorite robots from the original 1980s incarnation, in the new film.

“We have big guys, some little guys. We have a lot of littler ones, too. Little weirder ones,” Bay says. Like the Insecticons, which were giant bugs in the original series and Hasbro toy line, but are now tiny creepy-crawly infiltrators.

Bay, who collects the Vanguard Award Thursday night at ShoWest, offers a peek at others joining Optimus Prime and Bumblebee for another rock-’em, sock-’em robo-brawl.

As in the original, this fighter plane crash-landed on Earth a long time ago, and he will become a reformed Decepticon now fighting for the humans. His alternate form is the SR-71 Blackbird, the outdated but still-sleek Cold War spy plane.

“He’s old, craggy, forgetful … doesn’t work very well. Can’t transform very well, because he’s very geriatric. They get stuck with him a lot,” Bay says. “He knows the plan of the bad guys, but he forgets all the good parts of the plan.”

Sideswipe, a candy-apple red Lamborghini in the original, joins the cast this time as General Motor’s silver Corvette Stingray concept car. Jolt is a new foot soldier, played in four-wheel form by the Volt, a forthcoming Chevy hybrid plug-in. Two of GM’s other concept cars (the Trax and Beat) play The Twins, nicknamed Skids and Mudflap.

“Some of the junior Transformers are just dumb,” Bay says with a laugh. “But it’s great for kids because they’re like the Little Engine That Could. They’re (screw)-ups, but they get really heroic at the end.”

Arcee is the only female and turns up as Megan Fox’s hot-pink motorcycle. Co-screenwriters Alex Kurtzman and Roberto Orci say she was in an early draft of the first movie. “But we felt we needed to win the audience over before asking for that suspension of disbelief: a feminine alien robot,” Kurtzman says.

The Fallen is an ancient robot, sort of the Transformers’ version of Lucifer. He’s one of the original robot aliens, and his defiance and arrogance led to his banishment into another dimension.

The screenwriters say that The Fallen holds the key to life on both Earth and Cybertron, the Transformers’ home planet.

A smaller, but no less malevolent Decepticon is known as The Doctor — a spider-like droid that transforms into various implements of torture and has a not-so-nice encounter with star Shia LaBeouf.

Then there’s a giant one called Demolishor, and another tinier one with the sportier name of Wheelie.

These seven robots — Scavenger, Scrapper, Hightower, Longhaul, Rampage, Overload and Mixmaster — transform into construction machinery, but also link up with one another to form one gigantic robot stomper named Devastator.

“He’s made of vehicles designed to build, and he turns into is someone who loves to destroy,” Orci says. “He is an agent of absolute chaos.”

Bay says Devastator is the crème de la smash and got a uncharacteristic reaction out of the film’s executive producer already.

“Spielberg saw it and said, ‘This is (expletive) awesome!’ ” Bay says, and adds: “It’s always nice when you can make him swear.”

Behind Transformers Revenge of the Fallen

To maximize the impact on Imax, Bay shot several sequences on the company’s large-format film stock.